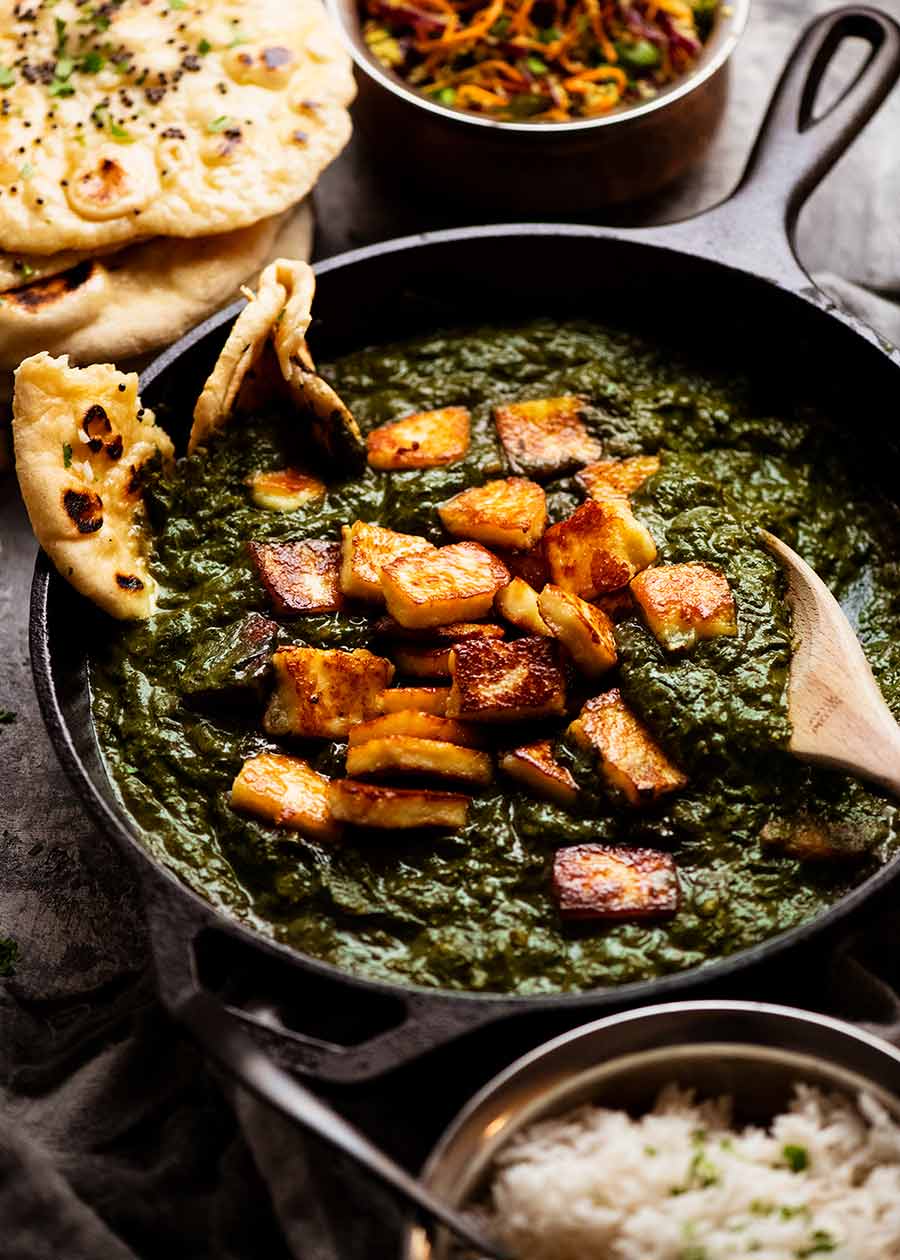 Palak Paneer is the ultimate and best-known Indian spinach curry, made with golden pan-fried pieces of cheese (paneer). For a recipe this special, I can’t endorse shortcuts. This version is made entirely from scratch – including the paneer cheese!

And … while we’re at it, welcome to Indian Week here at RecipeTin Eats!!

Palak Paneer is a recipe I’ve been busting to nail for years now. I’m thrilled it’s finally ready to share with you. So to celebrate, I’ve decided to declare this week as Indian week!

This week there will be three brand new, iconic Indian recipes to make your very own Indian feast:

Note the extreme and excessive use of exclamation marks here … a small indicator of the level of excitement and work that has gone into these recipes. I hope you enjoy them!

While there are many curries across the Indian subcontinent made with spinach, none are probably as well-known across the world as Palak Paneer – a dish of chunks of a fresh cottage cheese, called paneer, swimming in a lush sauce made with fresh spinach. The spinach gives the sauce a naturally thick and creamy consistency, and palak paneer’s signature deep, jungle-green hue.

This is one of the milder Indian curries out there, both in heat and spice intensity. The gentle spicing from fenugreek, cumin and coriander plays well with the delicate spinach flavour, without overwhelming it. Meanwhile, the paneer are like little creamy sponges that suck up all those tasty flavours in the sauce!

Admittedly, I used to think palak paneer was kind of boring – until I realised I’d never really had a great one. This curry is anything but dull when done right. It’s unique among curries with its creamy green sauce. It’s full of nourishing goodness and is packed with layers of flavour. And it’s completely vegetarian to boot.

This is a curry that can honestly please just about everyone. Whether it’s kids or card-carrying carnivores, I challenge you to find someone who’ll turn their nose up to palak paneer when it’s this good!

What you need for Palak Paneer

The two components of Palak Paneer are:

These days, you can buy it – but I implore you, don’t! While homemade paneer does take a bit of time to make, it’s simple. It’s just milk and lemon, and you don’t need any special equipment. Most importantly, it is far superior to store-bought paneer.

Store-bought paneer is hard and dry and kind of spongey. It’s more like bad feta in texture than what paneer should be. Homemade Paneer on the other hand is soft and creamy, and true delight to eat!

This is all you need to make homemade Paneer: just milk and lemon juice or vinegar.

I’ve posted the recipe for How to Make Paneer separately for ease of reading.

As well as better results, you will get an enormous sense of satisfaction from making your own cheese!

Here’s what you need for the Spinach Curry:

PLUS, of course, SPINACH!!

You need a LOT of spinach to make Spinach Curry. Like seriously, A LOT. As in five BIG bunches to yield 700g/1.4lb of leaves in total. Yes.

You will need to pick the leaves, wash and dry them, then chop them.

And I know, I know. The first thing you’re wondering is easier alternatives. Frozen spinach? Bags of pre washed baby spinach? I tried ’em all. It’s not the same, believe me – more on this below!

Easier spinach options – but why they also fall short

I was never going to publish Palak Paneer without trying out more convenient spinach alternatives! Here’s what I found:

How to make Palak Paneer

The steps below depict the steps for making the Palak Paneer. See the process steps in the separate Paneer recipe for how to make the homemade cheese.

Serve with Basmati Rice, or add a side of fluffy, bubbly and buttery naan which is coming your way on Wednesday. 😉 But if you can’t wait, whip up a quick batch of Easy No Yeast Flatbreads, which is my handy backup to real naan!

As a general note, in case you are wondering (because I was!), Palak Paneer is more spinach curry and less paneer. I always had it in my head that there was loads more Paneer in it, but actually, there isn’t heaps. I realise now that it’d be too much of a good thing if there was any more paneer, and this way the sauce really shines as the the other star of the show as much as the paneer.

If you do want more cheese – and I really don’t blame you – just scale up the Paneer recipe. It’s no more effort to make more!

Just to restate, it’s Indian Week here on RecipeTin Eats!! This week I’m sharing a series of brand new Indian recipes so you can make your very own Indian feast.

This Wednesday, I’ll be sending you the most magical naan recipe of your life – fluffy and chewy and bubbly, as it should be. I’ll also be publishing a terrific side salad that I’ve been obsessively eating all weekend.

And on Friday, we have SAMOSAS!!! I’m so thrilled about this one. These little babies are completely irresistible!

I hope you enjoy this week’s recipe bounty as much as I have creating, photographing and filming them!! All the washing up involved on the other hand – not so much … 😂 – Nagi x 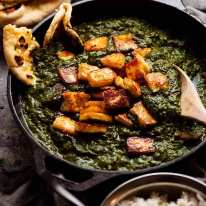 Recipe video above. A dish this iconic demands to be made properly – from scratch, with lots of fresh spinach and homemade paneer (Indian fresh cheese!) This is a magnificent vegetarian curry, packed with an extraordinary amount of nutrition and goodness!

1. Paneer – This is a fresh cheese used in Indian cooking. Even though nowadays you can buy it at stores, homemade is superior by a long shot. It’s softer, with a much more creamy texture (store-bought is hard and dry). It’s easy to make, it’s just milk curdled with lemon juice or vinegar, then strained. Recipe here.
2. Ghee is clarified butter, one of the traditional fats used in Indian cooking. It is simply butter without the water and milk solids, so you have pure butter fat. It has a more intense flavour than butter. Either buy it, make it (it’s easy and keeps for months) or just use normal butter!
3. Fenugreek seeds – Available at stores that carry a decent range of spices. I found it at Harris Farms (Australia). Also, of course, at Indian grocery stores! They are used whole in this recipe. Don’t worry they soften through cooking so you will not bite down on one and break a tooth!
4. How to peel tomatoes (easily) – Cut a cross in the base of the tomato and cut out a small circle from the stem end. Bring a saucepan of water to the boil, then put tomatoes in for 30 seconds. The skin will start curl away from the cut. Remove, put in bowl of cold water (just from the tap is fine). Then the skin will easily peel off. Scoop out watery seeds, then finely chop and use per recipe.
If you are in a hurry, you can use 3/4 cup of canned crushed tomato instead.
5. Green chilli – Use a large green chilli (cayenne) so it’s not too spicy.
6. Spinach – This recipe is best made using bunches of fresh true spinach, known as English Spinach.
You will need ~5 large bunches weighing 1.25 kg in total in order to get ~700g/1.4lb of spinach leaves. Yes, that is a lot – but think of all the nutrition you’re getting in!
Pick off the leaves, weigh out 700g/1.4lb. Wash thoroughly (spinach leaves are notoriously dirty!). Then dry and chop.
Baby spinach – I tried it, it’s too delicate to work here. The spinach sauce just turns into a green smoothie, and it has no texture nor much flavour.
Frozen spinach – This works, but you end up with about 1/3 of the recipe quantity and have to account for flavour dilution! To achieve the same flavour as per written recipe, use 250g/8oz frozen spinach for the entire recipe (ie. in place of 700g/1.4lb of fresh spinach leaves). Add thawed frozen spinach in place of fresh spinach, including the excess water leeched by the thawed spinach, and only cook for 3 minutes. Proceed with recipe. See more in post about frozen spinach and why the batch size is so much smaller.
7. Pan-fried paneer – While you are welcome to use paneer that has not been pan-fried, you’ll find that raw paneer is a bit delicate and prone to crumbling when stirred into curries. Once pan-fried, it sets better so it’s not as delicate. Plus, that golden crust is so good!
8. Storage – This curry will keep for 4 to 5 days in the fridge, but the spice flavour does start to fade. It’s best consumed freshly made, or the next day.

Wishing he was down there instead of up here…. (PS Is it just me or does his rump look rather large?? He’ll blame the camera. I’ll blame the Carrot Cake Cupcakes).